The Journey From Olympic Medalist to Team TaylorMade

If you've ever played a sport, you've likely dreamt of being an Olympian. Imagined stepping onto the field draped in the flag of your home country as the national anthem fills you with pride. It's the pinnacle for every athlete. A moment experienced by few but witnessed by many.

For TaylorMade's Marina Di Giacomo, that dream became a reality at the 2004 Summer Olympics in Athens, where she was awarded a bronze medal as a member of Argentina's Women's Field Hockey Team.

"You remember all the times waking up at 6 a.m. in the middle of winter, playing on a wet field in the cold. Pushing your body to the limit over and over. There were so many times I wanted to quit. What was I doing? What was all the sacrifice for? When you make it to the Olympics, you look back at every single moment, and you feel it was all worth it."
Marina Di Giacomo 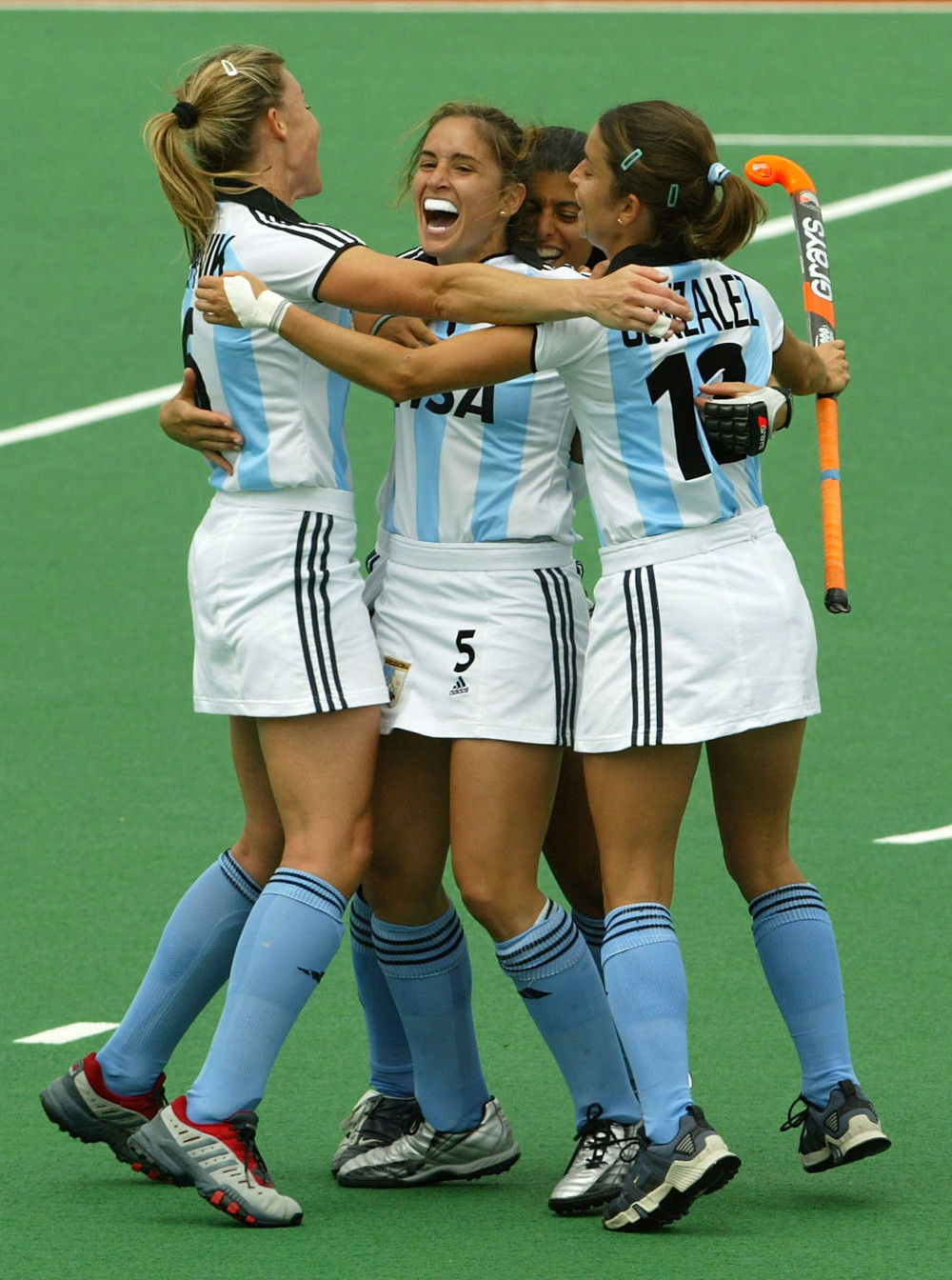 Marina Di Giacomo celebrates with her teammates after scoring a goal. Getty Images.

It was the culmination of a lifetime of work. She first took up field hockey at age 6, learning the game at Banco De Mendoza (Argentina) Sports Club in her home city – the country club's sporting equivalent. Having come from a hard-working middleclass family, she was fully appreciative of what that access meant.

"My parents worked very hard and made sacrifices for our family – like all good parents do,” says Di Giacomo, herself now the mother of a 12-year-old daughter, Giuliana. “I fully recognized the privilege and opportunity I had with access to the club. I was going work hard and be committed, upholding the values my parents wanted for me."

There she experienced fútbol, swimming, tennis and more, each helping her further develop as an athlete. But it was field hockey that captivated her the most.

By age 13, it was she was the one captivating scouts. She began traveling east every month to the capital city of Buenos Aires to train for days on end with the national team. Her burgeoning talent was only matched by her dedication. As a teenager, she would make the 600-mile pilgrimage on her own in pursuit of a spot on the team.

Known as Las Leonas (The Lionesses), Argentina's Women's Field Hockey team is an international powerhouse with seven Olympics, four Olympic medals and 14 World Cup appearances. The country's depth of talent made it difficult for Di Giacomo to secure her spot as a teenager. Then again, there were the times when her youthful risk-reward playing style clashed with teammates and coaches.

"I remember a coach telling me I was the kind of player that could be the reason we win by 3 or lose by 1," she laughs. "I was an attack-minded player. I wanted to score at every possibility."

With the writing on the wall, she made the tough decision to leave Argentina to play division 1 field hockey at Old Dominion University in the States. At the time, it felt like she was forgoing her chances of ever donning the famed blue and white jerseys.

"Players who lived or played outside of the country rarely made it onto the national team in those days," she says, acknowledging that field hockey has become a larger international community in the present day. "But I knew that leaving was the right decision for me. I had the support of my father, which made it an easier choice. I was risking my dream, but I felt like it was best for me and my development as a player and person."

Virginia…is not Argentina. Far from it geographically and culturally. In a place where she couldn't speak her native language, her play on the field did the talking for her. During her four years at ODU (1997-2000), Di Giacomo's attacking style flourished, and the list of accolades piled up.

The two-time All-American was also named 2000 Honda Award winner – a national award recognizing excellence in athletics and academic achievements. She led ODU to national championships in 1998 and 2000 and remains the NCAA all-time leader in points with 414. Her 167 career goals are second in NCAA history. In her senior year, she set single season records with 151 points and 63 goals. 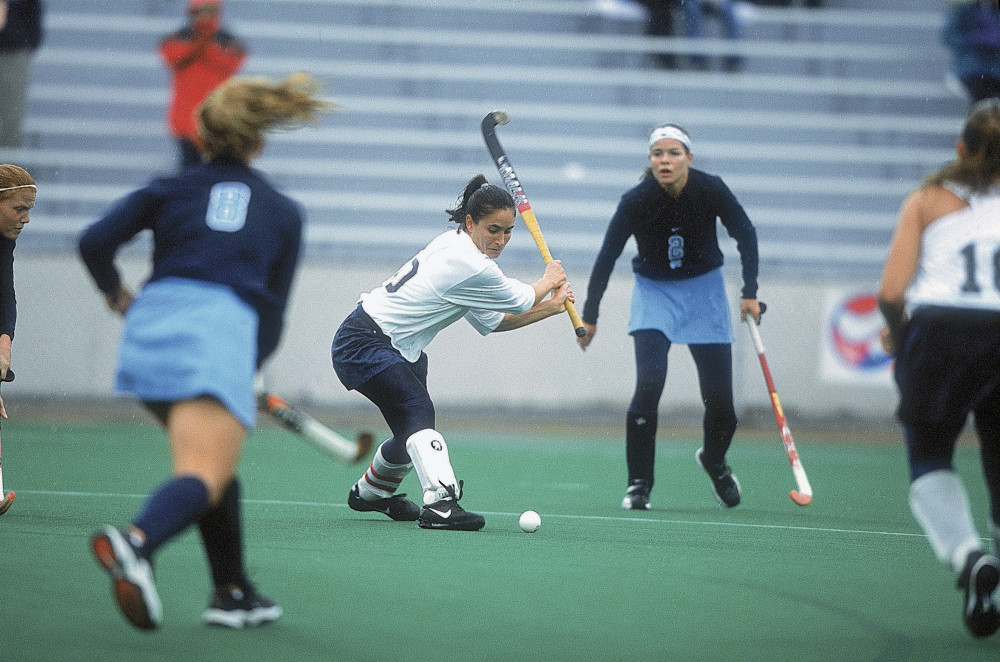 "What I accomplished as a college player helped me learn a lot for my personal and professional life. It translates to everything I do daily at TaylorMade," says Di Giacomo. "It gave me the discipline that I didn't have as a player. It gave me knowledge on leadership, on being part of a team, on taking rolls and doing your job to your max potential."

Her coach at ODU wrote the book on field hockey. No, literally, it's true. Beth Anders penned "Field Hockey: Steps to Success" and molded her players using concepts that prepared them for life beyond the turf.

Anders taught her something else, as well. How to play golf. Her first trip to a golf course was with her coaches during the off season, and the game has been a part of her life ever since.

“I have never bragged of my field hockey career, but I do brag about golf,” she laughs. “My proudest moment was winning the TaylorMade Club Championship. I don’t remember my score, but it was good enough to win the two lowest flights!” 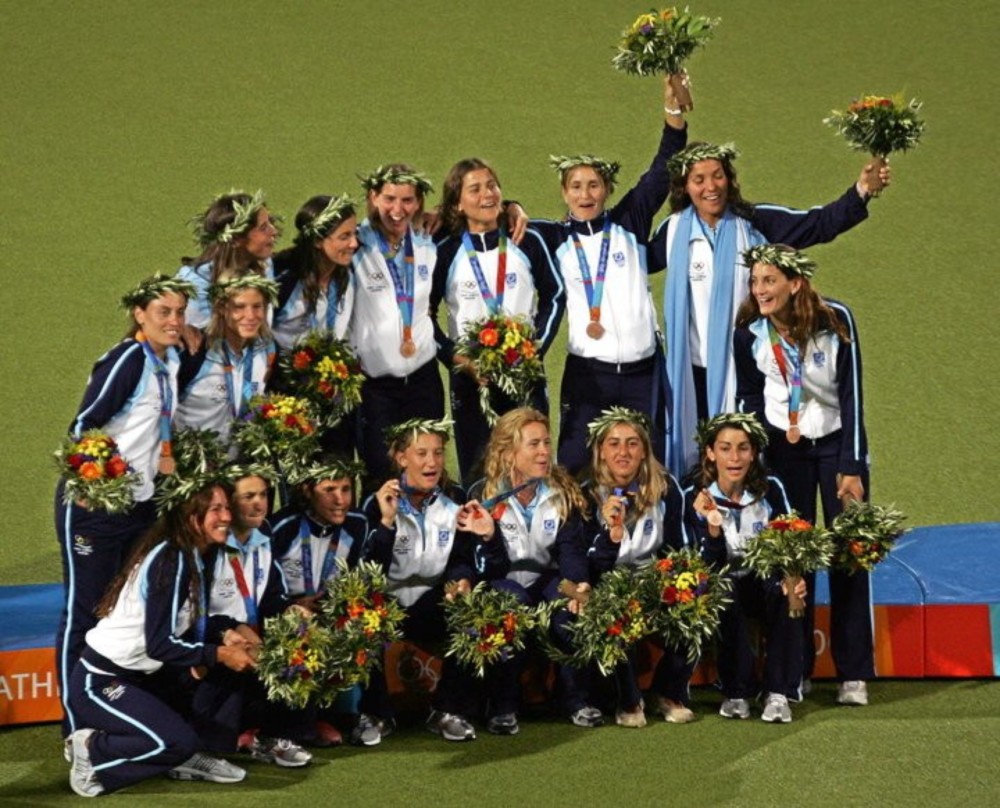 From the course to the field, the lessons she learned in college spurred the next phases of life for Di Giacomo. Leaving ODU with a degree in communications, she pursued life as a professional athlete. She took her talents to the Netherlands – a field hockey hotbed where the women's national team has won a record eight World Cups. After a few seasons slashing the turf as a pro, she recognized there was still something missing. A void in her playing career that she could no longer ignore. A spot on the Argentinian national team.

"My route to the national team was uncommon. I kind of had to self-recruit," she says. "While that doesn't sound like a big deal, on the international stage in Argentina, that just doesn't happen."

Taking her future into her hands, Di Giacomo emailed the Argentine coach directly – lobbying for a deserved spot among the game's elite. The fact that several veteran Argentine players belonged to the same club helped her case, and after the first email, the coach requested film from a recent game.

"' Ok,' I said. I'll send you a video from my upcoming game this Saturday." The clutch competitor wouldn't let the opportunity pass. She scored the game-winning goal in the last two minutes of regulation. "Perfect."

It was not just her skill on the pitch or all of the accolades she stacked. Her iron will and the commitment to following her dream brought it within her grasp. Two months after sending the video, Di Giacomo was named to the women's national team. But claiming the spot would not be easy.

First, there were financial barriers to getting back to Argentina, the cost of housing, food and paying the bills. While it fulfilled her passion and kept the lights on, pro field hockey in the Netherlands wasn't exactly the most lucrative venture. As her family rallied around her to make her dream possible, another setback arose. Just as she prepared to leave, an ankle injury put her on the shelf for three weeks.

"It wasn't serious, but it was enough to keep me from training," she remembers. "I thought that was it; my chance was over. But I still came every day to show I was committed even if I couldn't train, and I was selected."

The year was 2002, and as a 25-year-old, she was a veteran on the team. Often she felt like an outsider, as it was a rarity for anyone over the 24 to be selected, especially coming from abroad. But over the course of two years, building to the Athens Olympics, she carved out a significant role as a defender – a dramatic shift from the attack-minded player she'd been her whole career.

Having to play defender was a testament to the team's overall strength, which included seven-time World Player of the Year Luciana Aymar. It was also a sign of her maturity and growth as a player. While she was no longer the hotshot, go-for-broke attacker of her teenage years, nothing would keep her from charging forward when she reached the Olympic playing field. She scored twice in Argentina's six matches.

"Being in Olympic Village was the best feeling in my entire athletic life," she says, remembering moments next to Mia Hamm, Manu Ginobili and a young Michael Phelps. "When you're there, it makes you want to cry. Thinking about it now, it still does.

"You remember all the times waking up at 6 a.m. in the middle of winter, playing on a wet field in the cold. Pushing your body to the limit over and over. There were so many times I wanted to quit. What was I doing? What was all the sacrifice for? When you make it to the Olympics, you look back at every single moment, and you feel it was all worth it."

She keeps the bronze medal tucked away, stored safely in a non-descript box. That's the type of person she is, the accolades don't define her – only the chance to improve the next go around. She brings that same mentality to golf and TaylorMade, where she works as an Ecommerce and Content Specialist. As a golfer, she continues to improve – three birdies in a recent company outing support that claim.

Whether it's on the field, at the office or on the golf course, she's inspired by the drive to be better tomorrow than she is today. 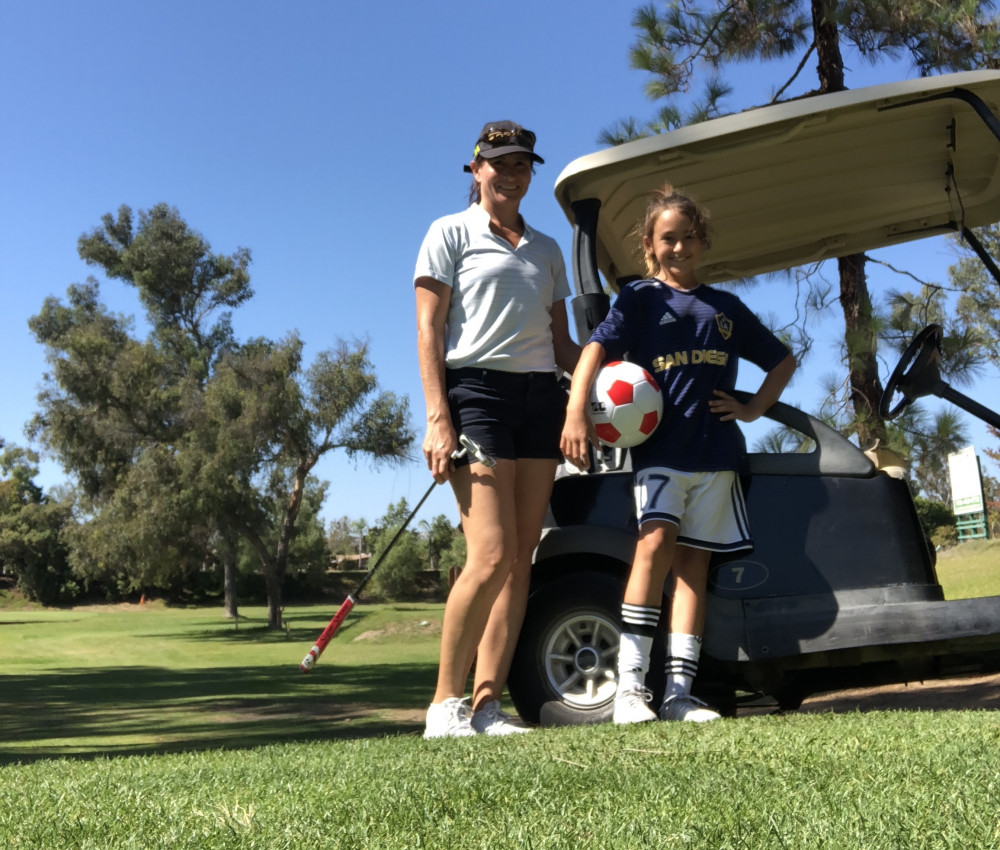 Marina Di Giacomo is working on converting her 12-year-old daughter, Giuliana, from a fútbolera to a golfer.
#International Women's Day#Women's Golf