Earlier this year, TaylorMade launched M5 & M6 irons with Speed Bridge technology. Just like the company’s 2019 drivers with the same name, these new sticks are engineered to make everybody FASTER.

When looking at the list of technologies packed into these irons, one feature stands out on both sides of the aisle—Speed Bridge. Speed Bridge is the unifying technology design found in both of this year’s iron models. Speed Bridge, which is visually recognizable along the backside of each M5 & M6 iron, enhances the energy transfer for longer and straighter shots while improving the sound and feel of every strike.

Combined with a variety of successful technologies featured in prior iron models, like our Speed Pocket and Inverted Cone technology, the M5 and M6 irons will put you on the path to hitting it not only further, but straighter.

While both the M5 & M6 irons feature Speed Bridge technology, there are several key differences between these irons. We’re here to showcase those differences and help you decide which model is best for your game.

When looking at M5 and M6 irons, it’s obvious they belong in the same “family”. Both look strikingly attractive and both feature Speed Bridge. But, a closer look and a side-by-side comparison will begin to tell the story of how the two models differ.

Right away, you’ll notice the difference in club head size between the M5 and M6. The M5 is a more compact shape, geared to help you maximize workability while giving it more of a “players” look. The M5’s blade length is 80mm, compared to the 90mm blade length of M6.

The sole of the M6 iron is also wider, which lowers the CG on the club to help you launch it not only easier, but further, too. That’s a win-win. With more mass on the bottom of the sole, the club will produce a higher-launching ball flight. The M5 has a narrower sole and rounded leading edge, making it easier to hit out of the rough.

With a smaller profile and footprint, TaylorMade engineers added weight to the M5 by inserting tungsten into certain clubs in the set. Specifically, the M5 irons feature tungsten weighting in the 4-iron through the 7-iron, the clubs where it’s needed most.

Last but not least, we certainly can’t forget about the finish. The M6 irons feature a satin chrome finish, while M5 is matte chrome, a more monochromatic look that some players prefer.

Choose M5 irons … if you have a more discerning eye but desire more distance. The M5 is designed to give you the distance associated with game-improvement irons but will provide the workability of a more traditional-looking players-inspired iron.

Choose M6 irons … if you are searching for maximum distance and forgiveness. The forgiveness that comes with the M6 irons’ larger clubface and weighting is designed to deliver longer, straighter shots, even on mishits.

To help visualize the difference between each of these iron models, refer to the chart below:

Additionally, you may be wondering what the main differences are between "old" iron models and the new iron models. Below you will find a color-coded list of the key performance technologies to show the upgrades within our 2019 M5 & M6 irons. 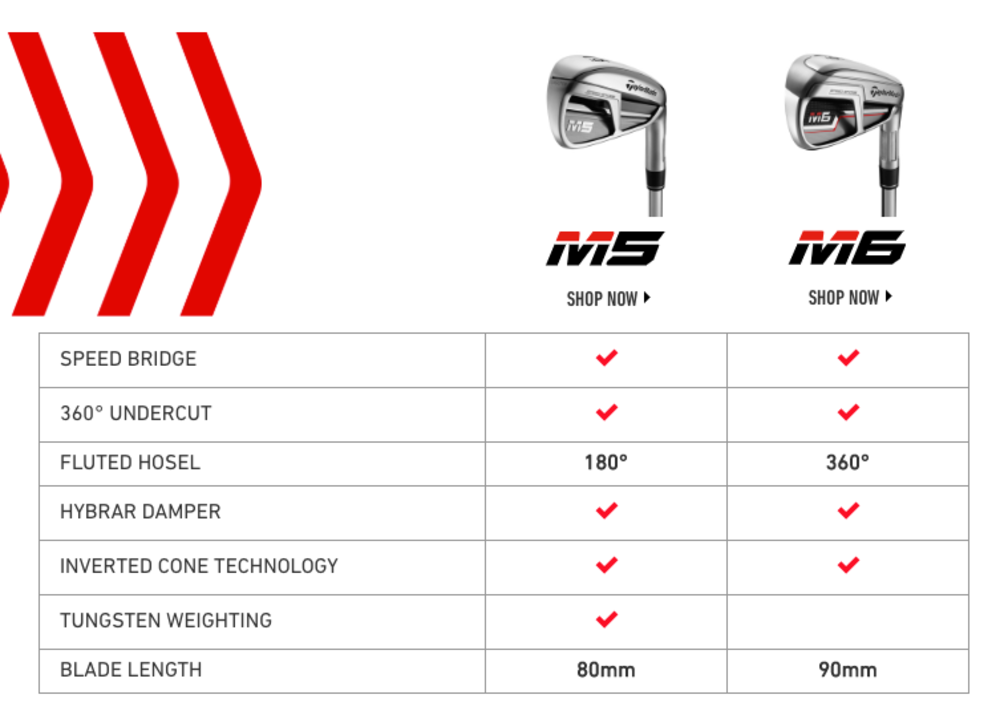